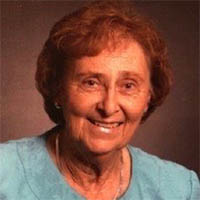 Anne Hartman passed away March 28, 2020 in Blacksburg, VA., where she had resided with her husband Dennis A. Hartman for 42 years. She was born in Sedalia, MO, on February 22, 1935 to Milton and Elizabeth Chamberlain, the eldest of three daughters.

She grew up on the family farm until 1949 when the family moved to Carrollton, MO and her father began a career at Farm Bureau Insurance. Having graduated from Carrolton High School in 1953, she was accepted at the University of Missouri, where she majored in Home Economics. Anne enjoyed being a student and member of the Gamma Phi Beta sorority for the three years that she studied at Mizzou. She was well on her way to graduating, until wedding bells rang and her life-long love affair with Dennis began.

Anne was working in a gift shop at the Lake of the Ozarks one summer day, when a handsome young man walked into the store, their attraction for each other began that day and led to a long, happy marriage of 64 years this June. Martha Anne Chamberlain was married to Dennis A. Hartman on a hot summer day, June 30, 1956 at the First Baptist church in Carrollton, MO. It was an elaborate service, with Anne’s two sisters, Claire and Janet, assisting as candle lighters. Anne wore a floor length gown of white imported Swiss organdy, a snug pointed bodice and a voluminous circular skirt made of layers of organdy over tulle and taffeta. In addition to carrying a cascading bouquet, the bride also carried an heirloom handkerchief that had been carried at her grandmother’s and mother’s weddings.

Anne and Dennis moved to Ithaca, NY where Dennis became a Professor of Animal Science at Cornell University for 21 years. Their two sons were born in Ithaca; Mark August and Douglas Milton. Anne participated in Bible study groups as well acted as a mentor to international exchange students at Cornell. They enjoyed bringing up their family in Ithaca and sharing many happy times with their Cornell faculty friends and their families.

In 1978 Anne and Dennis, now with both sons in college, decided to make a move to a warmer climate and moved to Blacksburg, VA. Dennis continued his career in the collegiate world and joined Virginia Tech as a professor of Dairy Science. Anne became a member of the PEO women’s organization in 1987. She also taught English to international exchange students at Virginia Tech and was an active member of the first Baptist Church in Blacksburg where she initiated a volunteer fellowship meal program for out of town families who were attending funerals at the church. A very talented cook, she took pride in creating and serving large dinner parties for friends and family, for all occasions. Anne wanted to see how the working world felt so she took a job at a local Blacksburg bank as a teller for a few years. Other hobbies included bird watching and gardening. Anne and Dennis both enjoyed stays at their Smith Mountain Lake house and winters in their condo in Englewood, FL.