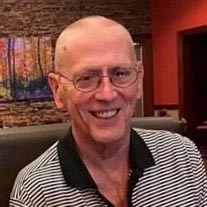 Dr. Wilson George Harper of Blacksburg, Virginia, went home to be with the Lord at the age of 81 years old. After several weeks of diminishing health, he died on the morning of Thursday, July 23, 2020, at Lewis-Gale Montgomery Hospital.

He is preceded in death by his father, Charles, mother, Marie, and brothers, Thomas, Charles, and James. He is survived by his wife, Faye, of 56 wonderful years, the absolute love of his life. Also, Wilson leaves behind his children, Heidi (Harper) Christopher of Roanoke, Virginia, Thomas and Marisa Harper of Littleton, Colorado, Rebecca (Harper) and Chad Randolph of Montgomery, Illinois, and Catherine (Harper) and Jorey Deml of Bloomfield, Colorado. He precedes in death his grandchildren whom he adored so very much, Matthew Christopher, Haley Harper, Jack Harper, Jake Randolph, Ella Randolph, and Mason Deml. Ever the family man, Wilson cherished each moment he could spend with his children and grandchildren and he will be missed greatly amongst them. Wilson also had many friends whom he respected and cared for in the Blacksburg area.

After graduating from dental school (WVU) in 1964, he served for two years as a Captain in the United States Army. He taught for several years at the Medical College of Virginia. Wilson practiced dentistry in Blacksburg, Virginia for over 35 years. He loved his patients and dentistry so very much. Wilson was a member of the Pierre Fauchard Academy, honored for his ethical and scientific contributions to dentistry.

Wilson enjoyed spending time with his family in Hilton Head, South Carolina, playing tennis, running, skiing with friends, and enjoying dinner with a group of Blacksburg locals. A civic-minded man, he was a member of the Rotary Club and the Lions Club of Blacksburg.

There will be a private family service. In lieu of flowers, please make donations to the American Diabetes Association. Arrangements by McCoy Funeral Home, Blacksburg.