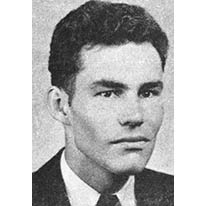 Pastor Leo “Allen” Harman was “absent from the body, and … present with the Lord” (II Cor. 5:8)on Wednesday, July 20, based on his faith in the promise of Romans 10:9, “That if thou shalt confess with thy mouth the Lord Jesus, and shalt believe in thine heart that God hath raised him from the dead, thou shalt be saved.”

He accepted Christ as his Savior on Aug. 9, 1958. Born on March 16, 1937, to Maynard and Fairy Harman of Floyd County, he was a member of the Floyd County High School Class of 1955 and served in the U.S. Army in Okinawa. Upon his call to preach, he attended Piedmont Bible College in Winston-Salem. He became pastor of Bob White Boulevard Baptist Church in January 1966.

In addition to his parents, he was preceded in death by his daughter Joanna Greiner, brother Donald Harman and sister-in-law Mary Love Todd.

During his jail ministry, Pastor Harman was nicknamed “John 3:16” by the inmates: “For God so loved the world, that he gave his only begotten Son, that whosoever believeth in him should not perish, but have everlasting life.”