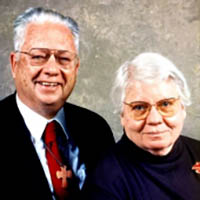 Vernon Ray Hancock, a long-time resident of Emory, Va., passed away peacefully on Saturday, June 19, 2021. Ray was born on July 10, 1926, in Baltimore, Md., to Wheeler Hancock and Rebecca (Helm) Hancock, the second of four sons, Frank, Earl, and Carl.

While still attending Baltimore Polytechnic High School, Ray enlisted in the United States Army in October of 1943. The Army had him complete his studies at Poly, graduating in February of 1944, then sent him to take engineering classes at Virginia Polytechnic Institute. Ray had never before been in that part of the country but was destined to make the Virginia Highlands his life-long home.

After the end of hostilities of WWII, Ray spent time in France as a clerk typist, being honorably discharged in December 1946 with the rank of Tech 4. He returned to VPI to finish his Bachelor’s Degree in Electrical Engineering. Looking at his possibilities for the future, Ray determined that his calling was to teach college mathematics, so he enrolled in the graduate math program at Johns Hopkins University in his hometown of Baltimore.

While attending Hopkins he started going out with Ruth Eileen Farnham, whom he had met through a Methodist Church youth group. She was a Registered Nurse whose family lived in the same neighborhood as the Hancocks. They were married June 17, 1950, at the Howard Park Methodist Church.

Upon completion of his studies at Johns Hopkins, Ray once again returned to VPI, this time as an instructor. In 1952, Ruth and Ray welcomed their first son, Dale into their family. In 1956, soon after the birth of their second son, Clark, they moved to New Orleans where Ray entered into the doctorate program at Tulane University. His studies emphasized the instruction of mathematics, with a specialization on Semi-groups. Upon receiving his PhD in 1960, he returned once again to VPI. In 1963, he was offered and accepted the appointment of Math Department Chair at Emory & Henry College, where he served on the faculty until his retirement in 1991.

Throughout his life, Ray has remained steadfastly active in the United Methodist Church in Baltimore, Blacksburg, New Orleans, and Emory, Va. He saw that his mission in life was to serve his community. Both he and Ruth were dedicated volunteers with the Boy Scouts of America; the Alpha Phi Omega Service Fraternity, with whom he served as Faculty Advisor to the Pi Omicron chapter since it was first chartered in 1966; the Emory United Methodist Church; and the Washington County Republican Party. Even after his retirement, he continued active participation with the E&H community, embracing his role as Professor Emeritus.

In 1990, they purchased property in Emory that they christened Cluster Point, a reference both to math and the magnificent oaks that graced the property. They built a home to fill with love and appreciation for one another and their community. Together, they enjoyed traveling, attending meetings and conferences, visiting local festivals and attractions, seeing plays, as well as vacationing at their timeshares in Massanutten and Pigeon Forge. In 1988, they were able to travel to England, Scotland, and France to learn about their ancestry and visit the places Ray had experienced during his military service. On June 17, 2000, they celebrated their 50th wedding anniversary, with numerous family members and friends in attendance at Cluster Point. In 2003, Ruth passed after a brief illness.

Up until 2018, when his declining health made in very difficult for him to travel, he enjoyed visiting his sons and their wives in Texas during the holidays. His family would assist him with an extensive Christmas card list, which included all beloved relatives and just about everyone he had ever met or known.

Ray was able to continue to live independently until 2019 thanks to Home Instead, which sent aides to his home daily to assist with many routines and chores. Over the last couple of years Kirk Bishop assisted the most with Ray and they developed a close and special friendship for which we are very grateful.

Ray is survived by son, Dale and wife, Nancy; granddaughter, Bethany; son, Clark, and wife, Frances; and numerous nieces and nephews. He also had some special grandchildren wearing furry, feathery, and scaly suits that enjoyed his annual Christmas visits and gifts of pet toys.

We extend our warmest thanks and gratitude to Memory Care at Bristol for providing Ray with excellent care and support over the past year, especially during the Covid pandemic. Ray lived a good long life, and we are so proud of all that he accomplished. Please join us at a later date for a celebration of life to be announced.

While we grieve this loss especially hard, our hearts are lightened by the thought that Ray and Ruth are together again. Rejoice! On the bench at their gravesite in the Holston Conference Cemetery is the Latin inscription that when translated reads “let it be said that we served.”

Those wishing to express sympathy online may do so by visiting www.farrisfuneralservice.com and signing the online guestbook.