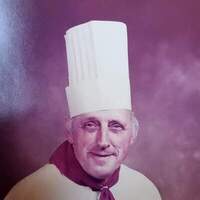 He is survived by his daughters, J. Rebecca Hamlin Morris (David) of Pearisburg and Rose Mary Hamlin Hill (Greg) of Radford; grandchildren, Rachel Aaron Morris Echols (Jason) of Richlands, North Carolina and their children Sasha, Gabe, and Rossi, Jessica Hilton of Blacksburg, and Rochelle Newman Snider (Josh) of McCoy and their child Rylan. Numerous nieces, nephews, and cousins from all over.

James was a Chef by trade. He trained numerous people including his children in the art of cooking. He practiced his trade in multiple restaurants in Virginia, Florida, and California.

James volunteered and served as a member of the Air Force Police from 1950-53. He was stationed in Alaska to guard the Aleutian Islands from invasion during the Korean Conflict. He also served as a member of the Honor Guard for Admiral Chester Nimitz. Upon discharge he joined the Navy Reserve of which he received his final discharge in his late 80’s.

His family served our nation starting back during the first Indian War in Jamestown in 1623 as well as the French and Indian Wars, the American Revolution, the War of 1812, the Mexican American War, and the Civil War. They have served in every major conflict since then.

All five of his brothers volunteered for duty during WWII. Two of them Dwight and Paul (both purple heart recipients) were part of the D-day Invasion, landing on Normandy beach. All five came home. His son served in the Marines and his grandson-in-law served in Afghanistan.

There will not be any services per his request.

The family would like to thank all of his doctors, nurses, etc. that cared for him in his final days.

In lieu of flowers please make a donation in his name to any returning active duty military support foundations.

The family is in the care of Mullins Funeral Home and Crematory in Radford, Virginia.