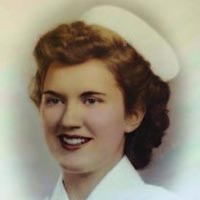 Jane Hamed passed quietly into heaven on Wednesday, December 9, 2020. At the time of her passing, she was at her home in Christiansburg, Virginia surrounded by a loving family and by the love of Jesus Christ.

She was born in Pocahontas County West Virginia on August 6, 1924; the daughter of the late Samuel Gilbert Sheets and Ollie Edmonton Sheets.

She attended nursing school in Harrisburg, Pa. during the early 1940’s in the Cadet Nurse Corps. In 1944, she married Julian M “Tony” Hamed, also from Green Bank, West Virginia. Together, they went to post-war Germany in the early 1950’s where their second son was born. They returned to the Hamed farm in Green Bank and stayed there from the early 1960’s until 2009 when Tony passed.

She was preceded in death by her husband, Tony; by her son, David Michael Hamed of Dearborn, Michigan; by her son, Steven Matthew Hamed of Roanoke, Virginia; and by a much-adored nephew, Rockford Norris Hamed Jr. of Alexandria, Virginia.

She is survived by her son, Joseph Hamed and daughter-in-law, Karen Valencia Hamed of Christiansburg, Virginia; by seven grandchildren and by several great-grandchildren.

She was also known by other affectionate names including Nurse Jane, Granma Jane, Mama Jane, and Susanna.

Never one to shy away from a challenge, she stayed busy with a host of skills and hobbies including Nurse, mother, wife, gardener, devout Christian, Sunday school teacher, patriot, army wife, hospital board member,and cattle farmer to name a few. There were times when she was the “doctor” in northern Pocahontas County when no other doctors were practicing, and she generously lent her time to those in need.

Due to the Covid-19 guidelines, the family will have a walk through visitation on Sunday, December 13, 2020 from 6 until 8 p.m. at the Wallace & Wallace Funeral Home in Arbovale.

Funeral service will be at 12 p.m. on Monday, December 14, 2020 at the Wallace & Wallace Funeral Home with Pastor Julian Rittenhouse officiating. Burial will follow at the Arbovale Cemetery Annex.

Covid-19 regulations will be practiced at all time.

In lieu of flowers the family wished for donations to either the: Bartow Frank Durbin Volunteer Fire and Rescue Company, PO Box 267, Durbin, WV 26264 or the High Rocks Academy, 195 Thompson Road, Hillsboro, WV 24946

WALLACE & WALLACE FUNERAL HOME IN ARBOVALE IS IN CHARGE OF ARRANGEMENTS