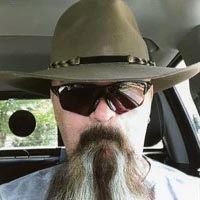 Kevin W. Hall, 54, of Christiansburg, VA passed away on Thursday, April 25, 2019. Kevin was born December 19, 1964 in Clifton Forge, VA to the late Paulmer “Harrison” Hall and Patricia “Patsy” Hall Hoke. He was also preceded in death by a step grandson, Brandon Church.

He was employed by Corning and served in the United States Army.

The family will receive friends on Tuesday, April 30, 2019 from 5 until 7 pm at Horne Funeral Home, Christiansburg, VA and a private family memorial service will be conducted at a later date.

The family requests that memorial donations be made to St. Jude Children’s Hospital in Kevin’s honor and to have a shot of Wild Turkey 101 in his memory.