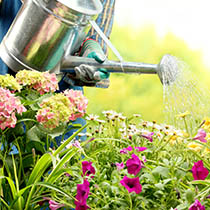 Glada was a long time member of Havens Chapel United Methodist Church in Check and she worked for Donkenny, Inc., in Floyd for many years. She loved to work in the garden and tend her flowers.

The children would like to thank South Roanoke Nursing Home for the care given to their mother for the last four years and to Gentle Shepherd for their care in the last few weeks.

Arrangements by Gardner Funeral Home, Floyd. Online condolences may be made at www.gardnerfuneralhomefloyd.com.