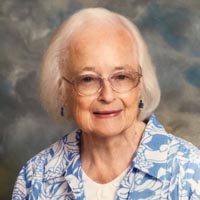 Phyllis Dixon Hain, of Blacksburg, Virginia and formally Wenonah, New Jersey, died peacefully on March 11, 2020, surrounded by her loving family. She was 93.

Phyllis was born on February 5, 1927 in Woodbury, New Jersey, the daughter of William and Agnes Dixon. She had one brother, William, who preceded her in death.

Phyllis grew up in Woodbury, where she was educated in the public schools and later attended Colby College. Her father owned a boat and at a young age she fell in love with being around the water and in a boat of any kind. One of her favorite places was Caspian Lake, Vermont, still a family favorite today.

In 1946 she married the love of her life, Jim Hain, also of Woodbury. They had two daughters; Judith (David) Reemsnyder of Blacksburg, VA and Phyllis (Jim) Northup of Luray, VA. While Phyllis focused on being a wife and mother, she was also an integral part of helping Jim build two successful companies; Eastern Marketing Associates, a manufacturers representative for marine products and Henley Corporation, which imported a variety of products for distribution throughout the U.S.

Jim and Phyllis moved to Blacksburg in 1991 to be closer to Judie and David. They had many years of joyful retirement, enjoying friends and family, community activities, cruising and traveling extensively in their motor home. They had been married for 63 years at the time of Jim’s death in 2010.

Phyllis had a life long love of music, and her family will always have fond memories of her playing the piano, which she did beautifully. Even as a young girl, she could play by ear. She also had a life long interest in politics and public policy, working the polls and supporting many worthy causes. She was an active and faithful member of the Wenonah and Blacksburg Presbyterian Churches.

A Memorial Service will be held at a later time in the spring.

In lieu of flowers, donations may be made to Feeding America or a charity of your choice.