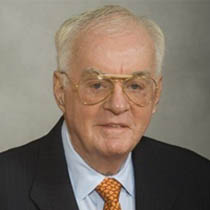 T. Marshall Hahn, Jr. of Blacksburg, Virginia, died peacefully at home on Sunday, May 29, surrounded by his loving family, after a decade-long battle with Parkinson’s disease.

Preceding him in death was his beloved wife of over 60 years, Margaret Louise (“Peggy”) Lee Hahn from Dewitt, Virginia. He went to be by Peggy’s side, where she has been saving him a place for over six years.

Marshall was born on December 2, 1926 in Lexington, Kentucky, to the late Thomas Marshall Hahn and Elizabeth Boston Hahn. He was also preceded in death by a brother, David Hahn, a sister, Betty Antoine, a son, William Marshall Hahn, infant granddaughter, Baby Hahn Hurst, and a son-in-law, Leigh Gifford Hurst.

Left to cherish his memory are the joys of his life, daughters Anne Hahn Hurst and Elizabeth (‘Betty’) Lee Hahn and son-in-law, Douglas S. Chancey, all of Blacksburg. He was especially proud of his three grandchildren, Erin Elizabeth McKelvy and Marshall Hahn Hurst, of Blacksburg, and Shane Dillon McKelvy of Takoma Park, MD. He is also survived by niece, Marie Antoine and her husband, Steve Sillett of Arcata, CA and nieces Jinka Hahn and Mary Elizabeth Hahn, both of Alexandria, VA. He credited devoted caregiver, Shanna (“Patton”) Letner, and neurologist, Jill Cramer, with adding years to his life.

A high school drop-out, Navy veteran and student, Marshall met Peggy, a home economics teacher, at a church social where he helped her serve ice cream using a meat cleaver. Against her mother’s advice, Peggy married Marshall in 1948, kicking off an adventure neither of them could have foreseen at the time. From classrooms and kitchens to board rooms and coliseums, they worked side-by-side to raise a family and launch a new era in Blacksburg, Virginia. As 11th President and First Lady of Virginia Polytechnic Institute and State University from 1962-1974, they changed the landscape of the university and community they both loved so much. Equally at home hosting dinners at The Grove or strapped to a tree stand for 10 hours waiting for a 400-lb. bear, they faced life’s challenges together.

After his tenure at Virginia Tech, Marshall and Peggy moved to Portland, Oregon (later Atlanta, Georgia), where he served as President and CEO of Georgia Pacific Corporation, parlaying a degree in physics to selling toilet paper to the world. Again, whether flying around the world on the Concord, or gifting Peggy (an avid gardener) with 200 tons of chicken ‘effluent’ spread over their beloved Hickory Hill Farm – which she deemed to be one of the best Christmas presents she ever received – he was a visionary and she was his staunchest collaborator. Malcom Forbes once sent a helicopter from his yacht to give Peggy a white-knuckle tour of Manhattan in order to steal a 30-minute meeting with Marshall. She obliged, but never let Marshall forget the sacrifice!

After his retirement in 1993, Marshall and Peggy moved back to their home at Hickory Hill Farm, where they continued to raise cattle, sheep, goats and eyebrows.

A funeral service will be held on Saturday, June 11 at 11:00 a.m., in Burruss Hall Auditorium at Virginia Tech, with the Reverend Joe Carson officiating. Interment will follow in the Westview Cemetery in Blacksburg. The family will receive friends on Friday evening from 3:00 to 6:00 at McCoy Funeral Home, 150 Country Club Dr., SW, Blacksburg.

Marshall sincerely appreciated all the visits and support from his many friends and family. In lieu of flowers, please consider a gift to the Virginia Tech Foundation (Foundation Gift Accounting, Mail Code 0336, 902 Prices Fork Road, Blacksburg, VA 24061). GO HOKIES!

“It’s not what you look at that matters, it’s what you see.”