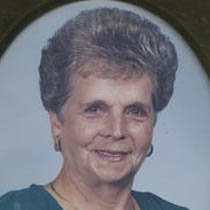 She was a member of the First Pentecostal Holiness Church-Family Worship Center since October 13, 1957 in Pulaski and retired from Jefferson Mills.