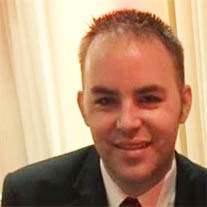 He was the beloved son of David Lee and Judy Hall Hagan of Riner. He was a graduate of Auburn High School, a member of Dublin Presbyterian Church, and a former employee of the Shelor Motor Mile.

Kyle was born in Salem and grew up in Shawsville where he enjoyed exploring the outdoors with his older brother Matt. Together, they enjoyed hunting, camping, four-wheeling, racing cars, and spending summers on the lake. He loved Virginia Tech sports and never missed a home game. His favorite hobby was collecting Air Jordans and his collection of over 100 pairs will be treasured by his parents forever.

Kyle was very close to his family and enjoyed traveling with his parents and aunt and uncle. He held his niece and nephews close to his heart, and particularly enjoyed battling his nephew, Colby, in the latest video game. He was loved for his soft-spoken kindness, generosity, and always seeing the good in those around him. A kinder, gentler soul could not be found. He will be greatly missed by all.

He was preceded in death by his maternal grandparents, Frederick and Martha Hall; and his paternal grandfather, Bernard Franklin Hagan. He is survived by his parents, David and Judy Hall Hagan; his older brother, Matthew; sister-in-law, Rachel; nephews, Colby and Tucker; and niece, Penny, all of Riner. He is also survived by paternal grandmother, Mary Louise Hagan.

The family will have private services to honor Kyle, however, flowers will be accepted by the family and may be delivered to Horne Funeral Home by Saturday, January 14, 2017. The family invites anyone who would like to come sign the book at the Funeral Home.