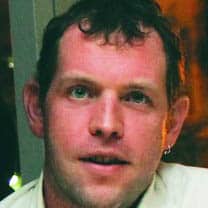 Michael David “Mike” Haberman was born on December 4, 1978, in Washington, D.C., to John Albert Haberman and Sylvia Jean Hargrove-Haberman. He passed away on October 29, 2021.

After growing up in Oxon Hill, Md., and graduating from the Science & Technology program at Oxon Hill High School, he enrolled at Virginia Tech. He would spend his next 25 years living in Blacksburg and remained a part of the Virginia Tech community, where he worked as a Lead Associate at D2 at Dietrick Hall. Michael to some, and Mike to others, was always the type of person willing to help others when he was asked, and prioritized caring for others above himself. Mike was a pop culture aficionado, and was a fan of Pokémon (and an avid Pokémon GO player), crossword puzzles, baseball, football, spicy food, Godzilla, Transformers, dinosaurs, Transformers that turn into dinosaurs, comics, hard rock and metal, penguins (both the animal and the hockey team), wrestling, and internet memes. Mike was a lifelong lover of cats, and over the years cared for a number including Elmer, Lobstahead, and Gary.

He was preceded in death by his mother, Sylvia, and is survived by his father, John, and brothers Edward and Nicholas.

In place of a formal memorial ceremony, Mike’s family asks that his mutual friends and colleagues meet up at locations of significance at convenient times to share memories. In Blacksburg, the Hokie House (322 N Main St) will host a remembrance on Saturday, December 4, 2021, at 3 p.m. with friends and family.

In lieu of flowers, you are welcome to make a donation to the Montgomery County Animal Care and Adoption Center, or to the American Heart Association.