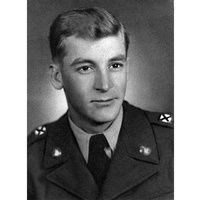 Merrill Reid Guynn, age 89, of Rich Creek, VA, passed away on Sunday, April 15, 2018. He was born on September 17, 1928, in his parents’ home, he was the 10th child in his family of 12. His father, William Joseph Guynn, of Rural Retreat, was a section foreman for the Virginia Railway who had skills that allowed him to do tasks with dynamite as well as lifting the Methodist Church completely off the ground to build its basement. His mother, Annie Ethel Harvey Guynn, was a devoted domestic engineer to her family, who was known for taking in family members as her own.

Graduating Narrows High School in 1950, his life was filled with a variety of careers that expand from being the mailman for Celanese, to working at the power plant on the railroad, and finally being a skilled laborer for Hercules (the Radford Arsenal). He was drafted on December 29, 1950, to the Army, where he was sent to Germany to serve with the occupational forces. In his words, “the army had an ill sense of humor; burning you up in the summer and freezing you in the winter.” He served overseas until December of 1952.

Prior to his draft, he married the love of his life, Peggy Ann Lester Guynn, on January 15, 1951, at her grandparents’ home in Narrows, VA. Within their 63 years of marriage, they had three girls, Harriett Guynn Pardue, Kathy Guynn McDaniel, and Gayle Guynn Kirby; later three grandchildren, Mary Pardue Crawford, Nora Kirby Hodges, and Joseph Michael Kirby. His greatest joy in life was spending time with his family.

He is preceded in death by his wife, parents, eight of his brothers, two of his sisters, his granddaughter Nicole Elizabeth Kirby, and son-in-law Gary C. Pardue. He is survived by his three daughters, three grandchildren, brother Myron Guynn, son-in-law Robert W. Kirby, and two grandson-in-laws.

He lived a full life, never sweating the little things, and always looking toward tomorrow.

Graveside services will be 2:30 PM on Wednesday, April 18, 2018, at Sunrise Memorial Gardens in Rich Creek, VA, with Rev. Greg Harrell officiating. A visitation will be held from 1:00 PM until 2:00 PM on Wednesday at Broyles-Shrewsbury Funeral Home in Peterstown, WV. Online guestbook can be signed or condolences may be sent to the family at www.broyles-shrewsbury.com. Arrangements by Broyles-Shrewsbury Funeral Home, Peterstown, WV.