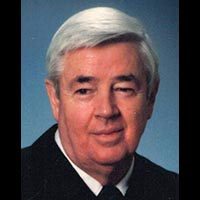 Weston grew up in Pearisburg, where his father was pastor, and later in Phenix, Va. He served in the U.S. Navy at the end of the Korean War, and after his four years of service, he returned to complete his college education at King College, Bristol, TN, where he received his BA degree and where he met and married Pulaski resident, Pat Hall, daughter of Herbert and Ernestine Hall of Pulaski.

After his graduation, he taught fourth grade in Bristol, and later completed his MA in school administration at East Tennessee State University. Mr. Guthrie later taught at Draper Elementary, Riverlawn Elementary, and Belspring Elementary schools. He served as principal at Belspring School for a brief period. From 1968-1971, the Guthries and their two small children served as educational missionaries at Bandeirante School, a school for missionaries children, in the small interior town of Ceres, Brazil, where Mr. Guthrie taught biology and other sciences, and served as house parent for the boys.

After returning to the States and teaching for a brief period, Mr. Guthrie was led by God into the Christian preaching/pastoral ministry. He received his Master of Divinity degree from Union Theological Seminary in Richmond, VA in 1976. Being ordained, he served a three church field of Slate Mountain, Indian Valley, and Bethesda Churches in Floyd County, VA. After that, Mr. Guthrie served Olivia Presbyterian, in Olivia, NC; Ronceverte Presbyterian (a two church field) in Ronceverte, WV; and Stone Memorial Presbyterian Church (a four church field) in Marion.

Retiring in 1997, Weston continued to supply small churches who could not afford a full-time pastor, preaching first in the Bluefield area, and then serving for nine years at Anderson Memorial Presbyterian Church in Pulaski from which he retired a second time, due to poor health, in the summer of 2009.

Weston’s Christian witness throughout his life-time has been felt by not only his students and parishioners, but by all his family members. He was a wonderful, loving, caring husband and father, and all would agree that one word to describe him would be “generous”. His billfold was always open to wife and children, to the Church, and to any in need. An unsung and unknown artist, poet, writer, and composer, Weston, also was an amateur botanist. He loved the woods and plant life, and gave credit to his Creator for His wondrous and awesome creation.

Weston’s life has been one of loving service to the Body of Christ, the Church, and to his friends and family. His humor, laughter, and sweet face, will be sadly missed, but his family rejoices that he is alive and with his Lord, and that they, who trust in Jesus, will see him again someday.

He is survived by his wife, Patricia Hall Guthrie; his daughter, Rebecca Guthrie Rusk (Stacy), their two sons Wade and Zane of Amarillo, TX; son, David Weston Guthrie (Tina), with their two sons, Eric and Ryan of Ronceverte, WV; and also by his son Joshua Allen Guthrie (Kate), of Midway, TN. Mr. Guthrie is also survived by one sister, Jane Guthrie Buford, and his sister-in-law, Mae Guthrie, of Harrisonburg. He had one other sister, Helen Guthrie Dove (deceased), and one brother, Dr. James Earl Guthrie, Jr. (deceased). He is also survived by seven nieces and two nephews, as well as numerous Guthrie related cousins.

Flowers will be accepted, but donations preferred and may be sent to Draper’s Valley Presbyterian Church Mercy Ministry Fund.