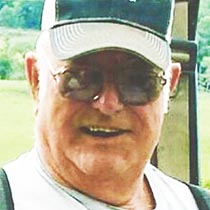 Carl Alexander Gusler, 83, of Hidden Hills Lane, Newport, departed this life Sunday morning, July 24, 2016 at Lewis Gale Montgomery hospital in Blacksburg. Born in Pearisburg on June 6, 1933, he was a son of the late Henry Buchanan and Lula Belle Carper Gusler.

He was first of all a farmer, and then a carpenter, and a school bus driver. Carl was a veteran of the U S Air Force. He was the last of a large family of brothers and sisters.

He leaves to cherish his memory his devoted wife of 63 yrs. Viola Cuddy Gusler; his sons and daughters-in-law Allen and Susie Gusler of Floyd, John and Jackie Gusler of Pembroke, Gary Gusler of Newport; his daughters Barbara Cook and husband Dexter of Newport, Beverly Handy of Blacksburg, Sandra Gusler and friend Barry Myers of Newport, Vicki Sheppard of Christiansburg; his 22 grandchildren; his 29 great-grandchildren; his one great-great-granddaughter; and his best friend and companion Kizzie (his dog).

Funeral services will be conducted Thursday at 11 am in the Kendall Funeral Home, 605 Snidow St., Pembroke with burial following in the Gusler Family Cemetery on Spruce Run near Newport. The family will receive friends at the funeral home Wednesday evening from 6 until 8 pm. Online condolences may be sent by visiting kendallfuneralhome.com.