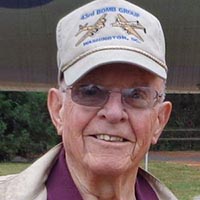 Ralph Derrill Grubb, 89, of Pulaski, passed away peacefully on Tuesday, August 18, 2015 after a brief illness.

He was a member of the “Greatest Generation” having served in the United States Army Air Corps during World War II from September 1943 to November 1945. He flew on 44 missions as a tail gunner on the B-24 in the South Pacific and witnessed the bombing of Nagasaki on August 9, 1945 which was an instrumental event in ending the war. He was proud to serve his country and wore his 43rd Bomb Group reunion hats daily in recognition of his Air Corp comrades and their sacrifices.

He retired from C&P Telephone of Va. after 36 1/2 years of service. He was a charter member of Memorial Baptist Church where he served on multi committees and likewise served his community as a member of the Y’s Men’s Club, Thornspring Ruritan Club, and as an assistant Scout Master of Troop 48 in Pulaski.

He was born in Beckley, W.Va. on November 9, 1925 to the late Paul and Exie Grubb and was also preceded in death by his wife of 62 years, Mozelle Wilson Grubb. He is survived by his son, Dan and wife, Debbie, of Pulaski; grandson, Brad Grubb and fiancé, Linde Groover, of Charlottesville, Va.; sisters, Margaret Butler, of Henderson, N.C., Betty Grubb, of Roanoke Va. and several nieces and nephews.

He was a loving husband, dad, grandfather, uncle and friend that will be missed by all.

The family would like to express our heartfelt gratitude to Dr. Ken Pendergrast, his office staff and the nursing staff at Lewis Gale Hospital- Pulaski for their loving care and devotion.

The family will be receiving friends from 11:30 to 1:30 p.m. on Friday August 21 at Memorial Baptist Church in Pulaski with the service to follow led by Pastor Mike Jones. Interment will occur at 3 p.m. at the Southwest Virginian Veterans Cemetery in Dublin with graveside rites conducted by V.F.W. Post 1184, Pulaski.