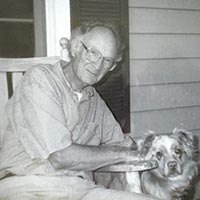 Raymond Groves, 95, of Blacksburg, Virginia passed away unexpectedly while golfing at the Blacksburg Country Club with friends on Friday, October 9, 2020. Ray seemed never to grow old, taking daily walks with his beloved wife, Ann, and playing golf every week, where he continued to score below his age. His sharp intellect, kind blue eyes, and gentle manner never faded. We will always remember him as a friend described him: “a true hero of intellect, spirit, and kindness.”

Born in Detroit, Michigan on September 15, 1925, Ray grew up throughout the Northeast before joining the United States Army at 18 and leaving for the European theatre of World War II with the 87th Infantry Division. He headed a mortar squad with the 87th, traveled through France, Belgium, Luxembourg, and Germany, and fought in the Battle of the Bulge. The 87th lost 1,100 of its soldiers during this time. After World War II, he remained in an officer reserve corps and was called to fight as a Ranger in the Korean War. Because of witnessing so much violence, he remained a lifelong pacifist. He attended college on the GI Bill, graduating from Rensselaer Polytechnic Institute.

Ray loved sports–downhill skiing, golf, hiking, baseball–and met his wife, Ann Alvord Groves, skiing in Stowe, Vt. They remained married for 55 years, raising their children in South Burlington, Vt. and retiring to Blacksburg in 1997. The family enjoyed many adventures in the Green Mountains of Vermont camping, hiking, and cross country skiing. Ray worked as an agent for New York Life Insurance until his retirement in 1997.

In Blacksburg, Ray served on the Animal Care Committee at Virginia Tech and continued his love of golf with regular games at Blacksburg Country Club. An avid birder with Ann, the two were members of the New River Valley Bird Club. Ray read voraciously, and loved to discuss almost any topic. Not only did he age gracefully, but he continued to expand his interests and learn more about the world and himself as he grew older. The years seemed only to affirm his deep faith and his belief in the goodness of everyone he met.

He is survived by his wife, Ann Alvord Groves; and two children, John Groves of Eugene, Ore. and Jennifer Groves of Bridgeport, Conn. A private burial will be held in Greenwich, Conn. A memorial service will be held at a later date in May or June of 2021. The family requests that gifts be sent in Ray’s name to the Vermont Association for the Blind or the National Audubon Society.