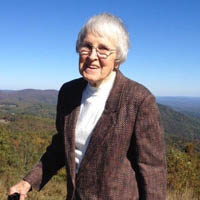 Anne Grover was born in Philadelphia, graduated from Upper Darby High School and University of Rochester. Anne and Norm met at a church retreat, married in 1950. Anne worked at the YMCA while Norm got his doctorate from Yale Divinity School. They moved to Hollins, Va. in 1954, and to Va. Tech and Blacksburg in 1957. Anne raised the four kids and worked at Sears and later at Carousel Child Care.

Anne and Norm were very active in many organizations and causes, including Blacksburg Presbyterian Church (choir, Sunday school and elder), NAACP, PTA, Band Boosters, Master Chorale, Habitat for Humanity, Peace and Justice, Montgomery Co. Democrats, Beans and Rice, ACLU, People to People and many more. Anne and Norm loved concerts, theater and lectures at Tech. They both loved to travel and did so widely. They were very active volunteers in the community and often reached out to newcomers or those in need, immigrant and grieving families. Anne especially adored her grand-and great-grandchildren.

A service will be held on Sat. July 20, 2019 at 2pm at Blacksburg Presbyterian Church with a reception to follow. In lieu of flowers, donations may be made to Habitat for Humanity.