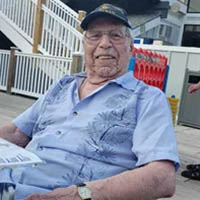 Sanford “Sandy” Gross, 92, of Christiansburg, passed away on Thursday, October 24, 2019 joining his beloved wife of 62 years, Bobbie Rucker Gross; and only son, Ben. He was also preceded in death by his parents, Benjamin Gross and Malvine Rubin.

Sandy graduated from James Madison High School in Brooklyn, NY, attended NYU for a short period and then joined the United States Marine Corp. After his discharge he attended Syracuse University and then graduated from Whittier Co0llege in California with major in chemical engineering. After a short deployment with a chemical company in New York, he joined Hercules Powder Company in 1951. Sandy retired from Hercules in Radford, VA, after 42 years.

Sandy was primarily in Utah with several different ICBM’s and finally group supervisor of the non-destructive test group. He returned to Virginia and worked on several types of propellant rockets. He was a member of the American Chemical Society, the Radford, VA Chamber of Commerce and the Marine Corps League NRV Det. 1190. Sandy also belonged to two bowling leagues, ‘Up & Atem’ and ‘The Dixie League’ as well as being past president of his bowling division and was a member of the Bowling Hall of Fame.

Funeral Services will be held on Sunday, October 27, 2019, at 10 a.m. in the Horne Funeral Home Chapel, with Rabbi Kathy Cohen officiating. Interment will follow in Sunrise Burial Park, Radford, VA.