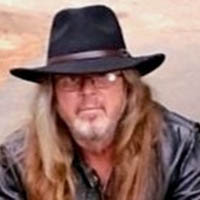 “Wild Bill”, or “The Wild Man”, as he was commonly known, was born in Pulaski,  VA, but lived most of his early life in Dublin, VA.  Bill graduated from Pulaski County High School in 1978, where he enjoyed playing baseball, wrestling, and his greatest love, football.

After graduation,  Bill worked for over 10 years as a machinist at Inland Motors (Kollmorgen).

Having an adventurous spirit,  Bill headed Northwest to Dutch Harbor, Alaska.  He worked there for 10 years as a QC inspector on fishing boats.   During his off seasons, Bill traveled to Rhinelander,  where he eventually made his home. Over the past years, Bill has worked various jobs, most recently with Northwoods Nursery.

Bill enjoyed cooking and grilling.  He tweaked recipes and created his own recipes.  Bill loved Southern foods, but he also delighted in introducing various cuisines and spices to his family and friends.  Bill was the most happy when entertaining his friends and family while listening to his love of Rock and Roll and country music.

Story telling, along with his sense of humor, were among his gifts.  Bill was known for combining words which fondly became “Bill-isms”.

Among Bill’s interests and loves were Nascar, college and professional sports in both basketball, and football (Go Packers!).

Bill was a history buff, among his favorite subjects were the Civil War, and World War II.

Bill is survived by his girlfriend of 25 years, Donna Barnhill, and her sweet granddaughter,  Kiersten.  His is also survived by his Mother, Myrtle Grinstead, sister,  Minniejan Krenzer, sister-in-law, Ivy Grinstead, and many neices and nephews.

He was preceded in death by his Father, Charles M. Grinstead,  and brother Barry M. Grinstead.

A Celebration of Life Service will be held at a later date in Rhinelander.

Memorials may be made to the donor’s favorite charity.