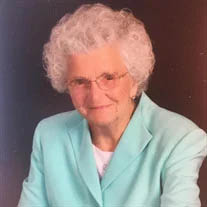 Lillie Esther Griffith, 103, of Pilot passed away peacefully with family by her side on August 13, 2022. Lillie, known to most as Granny Esther, was born May 3, 1919 to the late Enoch and Leona Duncan.

She worked at Imperial Reading for many years. Esther attended White Rock Church and The Christiansburg Church of Brethren. She enjoyed many things in life including bowling, traveling, and being outdoors, but most of all she loved spending time with her family and friends. Esther would head south for the cold winters with her daughter in a RV and spend time in Florida with family and friends. She often played pranks on her family and loved to make everyone laugh. Esther loved greeting cards, Virginia Tech Hokies, racing and had even been spotted on the back of a Harley. She was once pictured in an article at the age of 102 stirring apple butter. Esther remained active and lived life to the fullest.

Esther will forever be remembered for her witty sense of humor and kind heart. Esther was a loving mother, grandmother, sister, aunt and friend.

Visitation will be Sunday, August 21, 2022, from 12 -2 pm, followed by funeral services at 2 pm at the Horne Funeral Home with Pastor Leon Alley officiating. Interment will be Monday at 11 am at Roselawn Memorial Gardens.

The family would like to thank Kindred Hospice for the care they gave Esther over the past month.