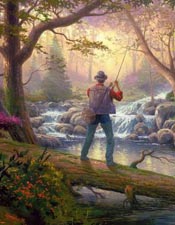 L. Lee Griffith, Jr., age 55, of Christiansburg died Friday, April 4, 2014, at UVA Medical Hospital from complications of a kidney transplant.  He was born on May 4, 1958.  He was preceded in death by his father, Red Griffith; sister, Debby Aliff; mother-in-law and father-in-law, Virginia and Mason Childress.  Lee was a Nationwide Insurance Agent in Blacksburg for many years.  He was a long time member of St. Paul United Methodist Church.  He was also a long time member of the Christiansburg Hunt Club and Montgomery County Fish and Game Club.  He was a graduate of Christiansburg High School and Concord University and a member of their Conference Championship Football Team as well as a member of the Sigma Tau Gamma fraternity.  He is survived by his wife, Rosa C. Griffith of Christiansburg; son and daughter-in-law, Justin and Rebecca Griffith of Christiansburg; his mother, Joan O’dell and husband, Richard; sister and brother-in-law, Terri Coleman and husband, Mike of Pulaski; brothers and sisters-in-law, Jay Griffith and wife, Kathy of Louisa; brother-in-law, Odell Aliff; uncles, Dude Griffith and wife, Jackie, Mike Griffith and wife, Terry Lynn; several nieces and nephews.  The family will receive friends from 5-8:00 pm Monday evening at the McCoy Funeral Home, 150 Country Club Drive, SW, Blacksburg. Services will be held Tuesday, April 8, 2014, at 11:00 am in the St. Paul United Methodist Church with the Rev. Michael Copeland and Rev. Doug Kanney officiating.  In lieu of flowers memorial contributions may be made to The Jimmy V. Foundation, 106 Towerview Court, Cary, NC 27513. Arrangements by McCoy Funeral Home, Blacksburg.