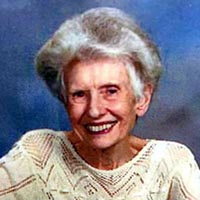 Kathryn Jane “Kitty” Griffin, 89, went to be with her Lord on Friday, March 8, 2019 at Lynchburg General Hospital. She was the wife of the late Rev. Dr. Alton Lloyd Griffin. She was born in Cleveland, Tenn., on May 26, 1929, a daughter of the late Newton Taylor Barnes and Belle Cochran Barnes.

She earned her BA degree from Carson-Newman College and later earned her MA degree in English and secondary religious education from Southwestern Baptist Theological Seminary where she met her husband. She and her husband were involved in home missions in Colorado. After moving to Lynchburg in 1964, she taught for a number of years for the Lynchburg Public Schools, and supported her husband in ministry as the first Pastor of Calvary Baptist Church. Their ministry led them from Lynchburg to Floyd and later retired from Floyd Baptist Church. Being very artistic, she was an active and published writer and photographer and served as music director for the church for a number of years.