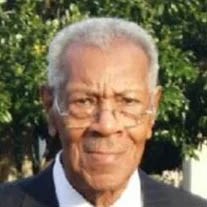 Edward Williams Green (95) was born in Austinville, Virginia, on March 10, 1927, the second of four children born to the late Stonewall Jackson Green and Bessie Odell Frazier Green. He departed this life peacefully in his sleep on July 12, 2022.

Edward received his early education from Christiansburg Institute; before enlisting in United States Army during WWII. He received his secondary education from West Virginia State University and Drexel University. Edward retired after 31 years as a mechanical engineer from Hercules /Alliant Tech Systems, Radford, VA where he was responsible for process improvement and innovation. Several of Edward’s innovations and processes are in use today.

Edward was a member of Prince Hall Free and Accepted Masons and Montgomery County, VA NAACP. He was also affiliated with the Society of Automotive Engineers.
Edward was an active member of St. Paul AME, Blacksburg, VA, and St. James AME, Winston-Salem, NC. Edward was recognized numerous times for his work on the Planning Commission City of Kernersville, NC. Before his move to the NC Piedmont Triad, Edward served several terms as vice-chairman for the Montgomery County, VA Planning Commission, and a liaison to Blacksburg’s Planning Commission. Edward was an advocate for Blacksburg’s African American community, often representing their causes at public hearings. He enjoyed reading, gardening, traveling (especially) Topsail Island, NC.