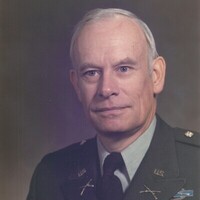 Eugene H. Grayson, Jr., a retired Army Colonel and longtime helicopter pilot, passed away on Sunday, November 8, 2020 after a valiant fight with cancer which was Agent Orange related.

He was a native of Radford and is survived by his wife of 60 years, the former Betty Davis, also a Radford native; sons, Howard and Jeffrey (Heather); grandson, Jeromy and granddaughter, Jillian; grandson, Holland (Faith), and granddaughter, Reese; and great granddaughter, Kinsley; sisters and brothers-in-law, Mary Hite and Thomas Alvey, and Sally and Mark Chinn.

He was preceded in death by his father and mother, Eugene and Helen Grayson, and son, Steven, also Radford residents.

He graduated from Radford High School where he was President of the Key club and participated in all three boys’ sports. He graduated from VMI as a member of the class of 1958 and awarded a Regular Army Commission as a Second Lieutenant in the Infantry. For the next 28 years he served in various posts in the United States, Europe, Korea, and Viet Nam. He attended the Infantry Officers Basic Course, The Infantry Career Course, The Command and Staff College, and the National War College. While a student at Fort Leavenworth, he became a member of the John Hancock Masonic Lodge. During his career, he also earned Graduate Degrees from the University of Richmond and The George Washington University. The family enjoyed two tours in Germany where they were able to travel throughout much of Western Europe. During his combat tours in Viet Nam he served as Operations Officer in D/227th Aviation Battalion and in his second tour, he served as Operations Officer, (S-3)101st Aviation Battalion and subsequent commander of the battalion’s Cobra helicopter company. He also commanded the 11th Aviation Battalion and later he organized and commanded the 503rd Combat Aviation Battalion in Germany. He later served on the European General Staff and in the Pentagon where he headed the Army’s Flying Hour Program. Later assignments were at the Army War College in Carlisle, Penn. And the Marine Corps University in Quantico, Va. where in both posts he served as a Professor of Military Strategy Plans and Operations. During his service he was awarded two Legions of Merit, three Distinguished Flying Crosses, two Bronze Stars, the Air medal for valor with 16 oak leaf clusters, The Army Commendation Medal for valor with three clusters, the Viet Nam Cross of Gallantry, and several other Service awards. Following his retirement, the family returned to Radford where he joined the Kiwanis Club and rejoined VFW Post 776 as a life member. Before the Cancer caught up with him and in his younger years, he was an avid golfer and fly rod fisherman.

He loved his country, his family, honor and VMI.

Memorial services will be held at 11 a.m. on Friday, November 13, 2020 at the Mullins Funeral Home in Radford with Chaplain Joanne Menefee officiating. Interment with full military honors will follow in the West View Cemetery in Radford.

The family will receive friends Thursday evening from 4 until 6 p.m. at the funeral home.