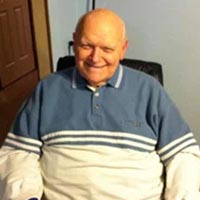 Don was raised in the Lutheran church, and graduated high school with a diploma. He served his country in the Army during the Korean War and during that time, attended a revival at a Church of God. The first night he got saved, second night he got sanctified, third night he received the Holy Ghost, and over that weekend was baptized. He then met Ruth and fell in love. They were married on November 27, 1954. They had 6 children (4 boys and 2 girls), 9 grandchildren (4 boys and 5 girls), 11 great-grandchildren (9 boys and 2 girls).

He was a member of the Elliston Church of God where he served God as a Sunday School teacher, Sunday School Superintendent, Church Treasurer, Church Deacon, and Youth Leader. He managed the Christiansburg KFC from 1974-1978, and was the owner of “The Feed Box’ in Christiansburg from 1978 to 1979. He retired from Poly-Scientific (MOOG) where he had worked for 38 years. He also worked during tax season at H & R Block. Don was a collector of coins. He treasured the word of God in his heart. He was a wonderful father and man of God and will be deeply missed.

The family will receive friends on Friday, August 16, 2019, from noon to 1 p.m. at Horne Funeral Home. The Funeral Service will begin at 1 p.m. in the Chapel, with Pastor Ronnie Duncan officiating. Interment will follow in Roselawn Memorial Gardens, Christiansburg.