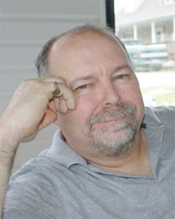 Larry Wayne Graham, age 52, of Blacksburg died, Friday, July 4, 2014, at his home. He was born in Montgomery County, Va. on March 31, 1962. He was preceded in death by his father, John B. Graham; and mother-in-law, Betty C. Gearheart. Larry owned and operated Graham’s Carpet for over 20 years. One of his hobbies included tinkering with classic cars. He is survived by his wife, Sharon G. Graham, son, Wesley Graham, daughter and son-in-law, Krystine and Phillip Wirt, all of Christiansburg, two special grandchildren, Thomas and Katie Wirt, six other grandchildren, mother, Emily D. Graham, brother and sister-in-law, Jack and Diane Graham, of Blacksburg, father-in-law, Tom Gearheart, of McCoy, sister-in-law, Sandra Cruise, of Pulaski, several nieces and nephews. Funeral services will be conducted Monday, July 7, 2014 at 11:00 am in the McCoy Funeral Home Chapel with the Rev. Marla Fonseca officiating. Interment will follow in the Centennial Christian Church Cemetery. In lieu of flowers memorial contributions may be made to the Centennial Christian Church Cemetery Fund, c/o Barbara Crockett P.O. Box 427 McCoy, Va. 24111. The family will receive friends from 6-8:00 pm Sunday evening at the McCoy Funeral Home 150 Country Club Dr., Blacksburg.