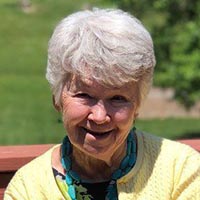 Betty was born on November 20, 1938, in Deerfield, Va., a small community just outside of Staunton, Va. She met Estil while working as a waitress at Brooks’ Restaurant in Staunton. They married in August 1968, combined their families and eventually settled in Riner, Va. She spent many years as a housewife and she later became a volunteer in a few nursing homes. This led her to become a caregiver, which would become the job she would love the most outside of caring for her family. Betty took care of several individuals in the area becoming close friends with their families, some of which she would call her own family.

She was a member of Gospel Light Baptist Church, located in Plum Creek. Her Christian faith and beliefs are her strongest legacy. She always tried to witness to family, friends, and strangers of the love that God gives. She would leave gospel tracts with a tip at restaurants or in bathrooms anywhere that someone could find it and hopefully come to know the Lord. She knew how blessed she was and the strength the Lord had always provided to her and she wanted others to know that joy as well.

Momma – you’ve run your race; the Lord says, ‘Well done, my good and faithful servant, well done.’ We will love and honor you always!!

The family will receive friends from 6 to 8 p.m. on Monday, March 18, 2019, at Horne Funeral Home. The Funeral Service will be held at 11 a.m. on Tuesday, March 19, 2019, in the Horne Funeral Home Chapel, with Pastor Keith Weaver officiating. Interment will follow in Sunset Cemetery, Christiansburg.

The family wishes to thank members of Good Samaritan Hospice for the support and care they provided. In lieu of flowers, donations can be made to Good Samaritan Hospice, 1160 Moose Dr., Christiansburg; to the St. Jude’s Children’s Hospital, ALSAC/St. Jude Children’s Research Hospital, 501 St. Jude Place, Memphis, TN 38105; or to local churches and missions. Online condolences may be left for the family at www.hornefuneralservice.com.