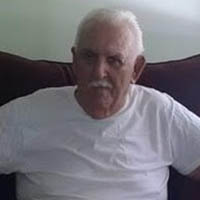 Robert Judson Goddard, 83 of Floyd, went to be with the Lord on August 16, 2020. He was surrounded by his loving family who adored him. He was born on April 4, 1937 in New Brunswick, New Jersey to Helen Agnes Duffey and John Goddard.

He was preceded by his beloved wife, Grace; his daughter, Arlene; and his mother and father.

Robert (Pop pop) was a proud grandfather and loved all his grandchildren. He worked many years as a painter and spent his later years living at the Pine Ridge apartments in Floyd where he made many friends.

He is survived by his brother, Raymond; sisters, Carole and Helen; daughters, Kathleen, Charlene, Marcy, Carole, and Cathy; his sons, Michael, Henry, and Bobby; many grandchildren, great-grandchildren, and one great great-grandchild. His granddaughter, Jennifer Hollandsworth (Scott), was a special granddaughter who spent her Saturdays taking him shopping and helping him with anything he needed. Ryan Maaser (Jessica) was so special to him he loved him dearly and thought of him like a son. Malinda Peters was his granddaughter who he loved dearly and who helped take care of him.

Special thank you to Skyline Nursing and Rehab for taking such good care of our Pops they called him Pop pop and took care of him as if he was their own and he loved them very much.