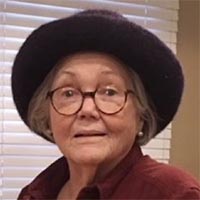 Helen Penelope Gleeson, 71, died of natural causes on June 1st. Born in Annapolis, Maryland, the daughter of a Navy pilot, Penelope moved frequently as a child until her family settled in Sanford, Florida.

As an undergraduate she attended Georgia Southern College and then the University of New Hampshire for her graduate degree in Nonfiction Writing. She had been a resident of Blacksburg since 1986. A gifted writer and storyteller, she taught in the Departments of English and Communication at Virginia Tech, as well as reporting for several years for WVTF. She visited Belfast in Northern Ireland in the early 90s when it was still the combative site of the “Troubles” and worked for many years writing a book on the Catholic women of Belfast.

Penelope’s first loves were plays and the theater but her literary tastes were wide, including creative non-fiction and popular mysteries, which she hoped to write one day. She was always full of ideas, plans and schemes, especially around her second love, cooking and her third, gardening, or even next, cats. Her friends remember her magical laugh, her self-depreciating humor, and her mugging attitude and wish she had lived long enough to follow her many dreams.

Penelope is survived by two brothers and numerous cousins, nieces, nephews, and aunts. In Blacksburg, her friends especially mourn her loss as a dear colleague and friend. In lieu of flowers, they wish friends to make a donation to the Humane Society of Montgomery County, NPR or the Montgomery-Floyd Regional Library, where she worked at as a volunteer.