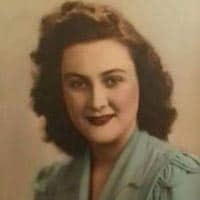 Marion Winifred Bowen Givens of Narrows, Va., passed away peacefully at her home on Feb. 25, 2018. She would have turned 93 next month. Mrs. Givens was born in Narrows to the late Lester Bowen and Myrtle Hoback Bowen.

She was a 1941 graduate of Narrows High School, and worked at the Radford Arsenal during World War II. When she was 18 she appeared on the cover of “Stars and Stripes” magazine. Marion attended McClain’s Business School in Bluefield, W.Va., and then worked for architect Alex B. Mahood in Bluefield. She went on to work as an executive secretary at the Celanese Corp., in Narrows, where she met and married Ralph L. Givens, a mechanical engineer who would be her devoted husband for 52 years, until his tragic death in an auto accident that injured her severely, on July 1, 2014.

Marion and Ralph were enthusiastic fans of his alma mater, Virginia Tech; their first date was to a Tech football game. They attended both home and away football games for many years. They enjoyed travel and had several favorite spots – Ralph, a Navy veteran, liked to go to the Tidewater area and watch ships come in; Marion particularly enjoyed Fisherman’s Wharf in San Francisco, and the French Quarter in New Orleans.

Marion was beloved by her niece, Betsy Bowen Ross of Charlotte, and Betsy’s husband, John Ross; by her nephew, Les Bowen of Haddon Township, New Jersey, and his wife, Barbara; by both couples’ children; by Marion’s late brother, Burns Bowen, and his wife, Hope Bowen, as well as by her husband’s niece, Linda Givens Walls, Linda’s husband, David; and by Ralph’s nephew, Morris “Marty” Givens. Her caretakers in her final years – among them, Peggy Falls, Teresa Sparks, Lisa Stafford, Annette Martin and Cheryl Albert — also formed a cherished bond with a feisty, spirited woman, who battled the afflictions of injury and age with tenacious dignity. She was a member of the First Methodist Church of Narrows.

Funeral arrangements are pending, through the Givens Funeral Home of Pearisburg. Online condolences can be sent to the family at givensfuneralhome.com.