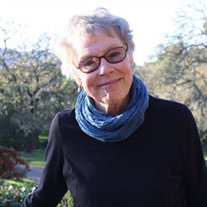 Stephanie was born in Des Moines, Iowa and grew up in the Sonoma Valley in California. She was valedictorian of her eighth-grade class at Dunbar Union Elementary School, graduated from Sonoma Valley Union High School in 1959 and attended the University of Minnesota. She transferred to UC Berkeley, and in 1962 married William Thomas. After she graduated from UC Berkeley in 1963 with a degree in English Literature, she and Bill went to American Samoa to teach English. Upon their return to California, they had three children, Katie, Eric and Megan.

After her divorce, Stephanie attended graduate school at Antioch University and graduated in 1979 with a Master of Arts with a Concentration in Urban Studies and Planning. She worked in public health for over 30 years, eventually relocating to Columbia, Missouri and retiring in 2004 from her position as the first ever Chief of the Office on Women’s Health for the State of Missouri.

She then moved to Blacksburg, Virginia and became a beloved and active member of her co-housing community, Shadowlake Village, and the Unitarian Universalist Congregation. She reveled in being Granny to Eric and Anna LoMascolo’s children, William and Maggie, and developed a deep and affectionate relationship with Anna. Stephanie later became Granny to Megan and Scott Barr’s son Evan and built a meaningful connection with Scott around his work in social justice and underserved communities. She connected with Katie’s husband, Michael Thomasson, over their shared love of history and travel. Stephanie often talked about how proud she was of her kids; she loved watching Katie build a non-profit agency and nurture many, many budding therapists; she delighted in Eric’s growth and development into the amazing High School History teacher of 22 years that he is; and she treasured Megan’s almost thirty-year career as an educator. She was very close to her three brothers Jim, Tim and Kim and their wives, Julie Eichenburger, Pamela Wiley, and Sue Katz. She also had close relationships with her eight nieces and nephews, who all adored her.

Stephanie was an adventurous woman, at one point strapping a kayak to the roof of her car and traveling around the US exploring, and later in life living her dream of owning a VW Westphalia Vanagon and setting off on camping and traveling adventures. She is remembered by all who knew her as a community minded, loving and giving soul who shed much light on all around her.

A Celebration of Life will be held this summer at the Unitarian Universalist Congregation in Blacksburg, Virginia.