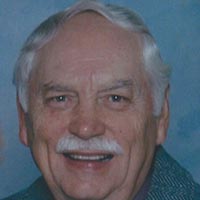 Sidney Allen Gilmore, 83, of Pearisburg, departed this life on Friday December 26, 2014 at Carilion Giles Community Hospital in Pearisburg. Born in Oakvale, West Virginia on April 25, 1931, he was a son of the late John Taylor and Dorothy Mary Britt Gilmore.

He was preceded in death by his parents, his first wife Bette Jo Anderson Gilmore, and his brothers William, Garland, and Richard Gilmore.

He leaves to cherish his memory his devoted and loving wife, Beverly Jean Canter Gilmore; his brother Teddy Gilmore of East Bend, NC; and his step-sons Geoffrey Filippi of Denver, Colorado and Joshua Filippi of Cambria, Virginia.

Sidney was a man of faith as a member of First United Methodist Church in Pearisburg; he was a patriot as a veteran of the U S Army (Korean War) and a member of VFW Post 6000 in Narrows; he was an athlete as a member of the original Bluff City Ducks Baseball Team (first integrated team in the area) and played Minor League (Appalachian League) pro baseball with the Bluefield Blue Grass and Welch Miners and coached several local teams; he was esteemed highly as a local businessman, operating a Montgomery Ward Store in Pearisburg for 11 years, served as a CPA and tax consultant for 56 years, traveled and worked for the American Heart Association for several years and earned his Real Estate License and Securities License; he was a graduate of Pearisburg High School in 1951, attended Concord College and earned his degree in business and accounting from Virginia Tech; he was socially active in the community as Past President of the Pearisburg Jaycees, Past President of the Pearisburg Lions Club, a member of the Moose Lodge, was honored with and award as Outstanding Young Man of the Year in American, and enjoyed so much participating in dances weekly with his wife.

Funeral services will be conducted Tuesday, December 30, 2014 at 2:00 pm in the Kendall Funeral Home, 605 Snidow St., Pembroke, with burial following in Birchlawn Burial Park in Pearisburg. Graveside military honors will be rendered by VFW Post 1184, and The U S Army National Guard. The family will receive friends at the funeral home two hours before the services. Online condolences may be sent by visiting kendallfuneralhome.com.