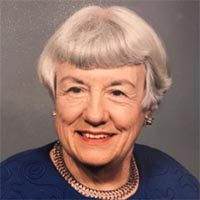 Nelzena “Noxie” Sullivan Gilmer of Blacksburg went to be with her Lord and Savior on Thanksgiving Day, November 28, 2019. She was just shy of her 95th birthday.

As unique as her name, she was an incredible mother, a dynamic and colorful individual, and an inspiration to many. She was born on Dec. 1, 1924 in Atlanta, GA to Pierce and Irene Sullivan.

Noxie was raised in Atlanta and attended Girls’ High School, and was the first of her family to attend college. At her beloved Mercer University in 1946, she was elected “Miss Mercer” – the most representative senior woman. Graduating with a B.S. in biology, she began her teaching career in Atlanta Public Schools where she taught 5th grade.

After receiving a brochure in the mail from the University of North Carolina, she enrolled there, achieved her M.S. in elementary education, and her “M.R.S.”. After placing a piece of wedding cake under her pillow, she met the dark-haired man of her dreams, Thomas E. Gilmer, Jr., a fellow grad student from Hampden Sydney, VA. They were married at Chapel Hill Baptist Church on April 20, 1951. Noxie and Tom moved to Richmond, VA and then on to Blacksburg, where the family put down roots.

Noxie had many roles in the community: active in the church as a choir member and soloist, a founding member of Virginia Tech Faculty Women’s Club, member of Bible Study Fellowship, Girl Scout Brownie leader and substitute teacher. Her foremost role was as loving wife and mother.

Giving her life to Christ in her youth, she not merely believed, but lived her faith throughout her years. She was recognized by Church Women United as a Valiant Woman in 2004.

Noxie was preceded in death by her husband Tom in 2014 after 63 years of marriage. She leaves behind: her brother Joseph (Carla) Sullivan of San Antonio TX, sister-in-law Kay Gilmer of Blacksburg, E.A. “Buddy” Brandon of Huntsville AL. She was also predeceased by brothers and sisters-in-law Bill Gilmer, Betsie and Boyd Coyner, and Pinny Brandon. She is survived by her children: Tommy Gilmer of Blacksburg, John (Karen) Gilmer of Kingsport TN, Debbie (Greg) Tobert of Vancouver Canada, Meg (Garrett) Weddle of Greensboro NC, Robert Gilmer of Blacksburg, seven grandchildren: Kevin, Joel (Sarah), Paul, and Julie Gilmer and Samuel and Meg Tobert and Joe Weddle, two great-grandchildren: Hudson and Graham Gilmer and numerous loved cousins, nephews, and nieces.

The family would like to thank Mom’s longtime and treasured care-giver of eleven years, Mrs. Betty McQuillar of Christiansburg and the entire staff of Kroontje Healthcare Center, where Noxie lived her last two years.

In lieu of flowers, donations may be made to Northside Presbyterian Church or the “Thomas and Nelzena Gilmer Excellence Fund in Physics” go to : give.to.vt.edu Ph: 800-533-1144.