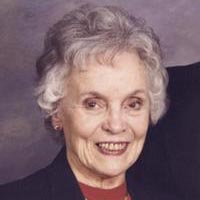 Calista “Kay” Upshaw Gilmer, 98, died on Tuesday, January 21, 2020, at Heritage Hall Healthcare Center in Blacksburg. She was born in Caroline County, Va., on May 27, 1921, to Edwin Thomas Upshaw and Nellie Clyde Andrews, the third of six children.

Calista was raised on her parents’ farm, and graduated in 1937 from Sparta High School. She went to Mary Washington College for two years, then worked in the Caroline County school system and, when World War II broke out, at the C&O Railroad in Richmond. She then returned to Mary Washington for two more years, receiving a Bachelors of Science in Education in 1946.

She worked at First Baptist Church in Richmond as youth minister, and at Radford University as Baptist Student Union director. In 1950, she married William “Bill” Newman Gilmer of Hampden-Sydney, Va., and the couple moved to Pennsylvania for several years before returning to Virginia in 1954. Their first child Peter Winston Gilmer was born in Philadelphia in 1953, and their second William Newman Gilmer Jr. in Richmond in 1955.

In 1957, the family moved into the historic Castlewood house at Chesterfield Courthouse, Va. Calista taught first grade at Gill Country Day School, and then from 1963 to 1977 she taught first and second grades at St. Michael’s Episcopal School in Bon Air. Her specialty was phonics. In addition to the regular classroom work, she tutored children after school from all over Chesterfield County, teaching hundreds to read and write during her career. While living at Castlewood, the family was active at Chester Baptist Church, where the Kay Gilmer Mission Group still commemorates her impact.

In 1978, Bill’s job took the couple to New York, and then to Connecticut, where they were active at Christ Church on Quaker Hill for many years. In 1995, they moved to Wytheville, Va., where Calista and Bill owned and operated Castle Hill Antiques, and were active in the Wytheville Presbyterian Church. When Bill died in 2014, Calista moved to Blacksburg to live with her son William and his family, and spent her final two years at Heritage Hall Healthcare Center.

Calista is survived by her two sons and daughters-in-law, Peter Winston and Tona Morgan Gilmer of Rougemont, N.C., and William Newman Jr. and Mary Ann Gilmer of Blacksburg; a sister, Elaine Upshaw Vaden of Richmond; a brother-in-law and sister-in-law, George and Wilhelmina Gilmer of Boulder, Colo.; a brother-in-law, E.A. “Buddy” Brandon of Huntsville, Ala.; three grandchildren, Justin Gilmer of San Francisco, Calif., Dory Paige Gilmer of Williamsburg, Va., and Sarah Calista Gilmer of Blacksburg, Va.; and numerous nieces and nephews, all of whom will miss her Thanksgiving pies!

A celebration of the life of Calista “Kay” Upshaw Gilmer will be held at 2 p.m. on Saturday, March 21, 2020, at Castlewood, 10201 Iron Bridge Road, Chesterfield, Va. Family and friends are welcome; RSVP is appreciated but not required. Register online at https://gilmercelebration.eventbrite.com, or leave a message with William Jr. “Bill” at 276-620-2117.

In lieu of flowers, memorial gifts may be made to the Annual Fund at St. Michael’s School, online at https://www.stmschool.net/give, or by mail at St. Michael’s Episcopal School Development Office, 10510 Hobby Hill Road, Richmond, VA 23235.