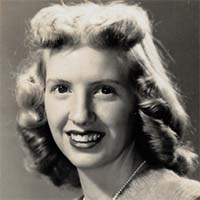 Kathleen Moore Gentry, 92 of Blacksburg, VA died Friday June 29, 2018. She was born in High Point, NC on October 17, 1925. She is preceded in death by her husband of 64 years Lt. Colonel Dennis V. Gentry, Jr., her daughter Joyce Gentry Smoot, and her parents Carl and Mary Moore of Galax VA.

She is survived by four children, daughter Karen Gentry Oganowski of Houston, TX; son Dennis Gentry III of Blacksburg; son Wayne Gentry of Panama City Beach, FL, and son Matthew Gentry and his wife Colleen of Blacksburg. Her five grandchildren are Amanda Smoot Decker and her husband Mark, Benjamin Smoot, Joshua Gentry, and Laura and Adam Oganowski. She is also survived by two of her three sisters, Lib Siceloff and Mary Murphy, both of Burlington NC.

Kathleen lived her early years in Galax, VA where her father owned a ladies clothing store. She was “Most Athletic” in her Galax High School graduating class of 1943. She and her sweetheart Dennis Gentry were “Cutest Couple.” During World War II she attended Appalachian University (at the time Appalachian Teachers College) in Boone, NC, graduating in 1947 in mathematics and as Captain of both the Basketball Team and the Flying Fish Swim Team.

She married Dennis Gentry in 1947 when he returned from occupied Japan. As a young army wife after the Korean War, she and the children followed Dennis’ military career moving seventeen times to Maryland, Texas, Hawaii, Oklahoma, back to Texas, Virginia, Kansas and Missouri, before retiring in Blacksburg in 1968. For about ten years she was a substitute teacher in Blacksburg schools in math and physical education.

Kathleen was fondly known as “Clem” to her many friends in Blacksburg. Clem loved sports. Always healthy and athletic, she began playing in several tennis groups three times a week after returning to Blacksburg. She often played outdoors even in the winter on her backyard court. The only time she entered a serious competition she was the Virginia Senior Women Singles Champion. As an avid Hokies football fan she had season tickets for thirty years and loved to talk college football and basketball. When she ceased playing tennis at age 89 she began playing in a small chess group which she enjoyed until recently. She kept a colorful backyard garden of perennials much like the one in Galax that her mother kept.

In lieu of flowers, the family suggests that contributions in her name be made to either Montgomery-Floyd Regional Library Foundation, 200 Miller Street, Blacksburg, VA 24060 or Carilion Clinic Hospice Donations, 707 Randolph St. #251, Radford VA 24141.

There will be no formal service. Visitation for friends and family will be Tuesday July 3, 2018 from 2 to 4 PM at the McCoy Funeral Home 150 Country Club Dr. SW, Blacksburg, Va.