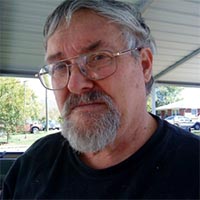 He was a retired Civil Engineer from the Town of Blacksburg. John was a member of SCV, the Mechanized Calvary and the Roanoke Geology Club.

He is survived by his wife, Barbara Garrett, sons, Sean Garrett, Michael Garrett, brother and sister-in-law, David Garrett and wife, Lauren. Graveside services will be conducted Saturday, October 26, 2019 at 1:00 pm in the Westview Cemetery, Blacksburg.