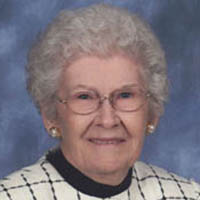 Thelma Algene Wertz Garrett, 95, of Elliston, and formerly of Roanoke, Va., left this life for her Heavenly home on Saturday, October 25, 2014. For the past 10 months she was a resident at Snyder Nursing Home in Salem, Va.

Algene was a loving dedicated wife, mother, and homemaker all of her life. She was a proud graduate of the Class of 1937 from Andrew Lewis High School. She was a devout Christian and a faithful charter member of Emmanuel Baptist Church in Roanoke. She served as Sunday School secretary for over 40 years. She also served in many other capacities as a greeter and even painted murals on the walls in the children’s department. She loved to knit, sew and paint. Her passion was painting on just about anything one could imagine. The family is blessed to have so many beautiful works of art to remember her.

Online condolences may be left at www.lotzfuneralhome.com Arrangements by Lotz Salem Chapel, 540-389-9208.