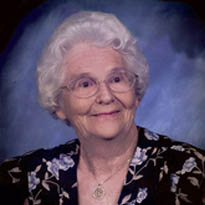 Edith Franklin Gardner, 91, of Fairlawn, passed away at Carilion NRV Medical Center on February 7, 2016. She was born in Hillsville, VA on October 11, 1924. She was a member of Fairlawn Presbyterian Church and Circle # 2. Edith was a dedicated homemaker whose pride and joy were her children, grandchildren, and great-grandchildren.

Funeral Services will be Wednesday February 10, 2016 at 11 AM at Fairlawn Presbyterian Church with Pastor Allison Unroe officiating. Interment will follow in Sunrise Burial Park, Fairlawn, VA.

A special thanks goes to the Carilion NRV Emergency Department and the CCU nurses for their loving care during this time.

Online condolences may be made at www.gardnerfuneralhomefloyd.com. The family is being served by Gardner Funeral Home, Floyd, VA