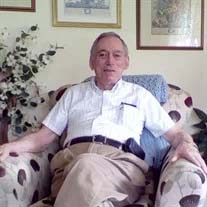 Dixie Davis Galyean, 84, of Christiansburg passed away April 22, 2020 at his home. He was a veteran of the US Air Force and Army & retired from Virginia Tech after 32 yrs as Chief Photographer in the media department.

He was a member of Cambria Baptist Church for 41 years where he had served as deacon & sang bass in the choir with his daughter & granddaughter.

The family will have a private graveside service at Independence Cemetery in Fancy Gap.