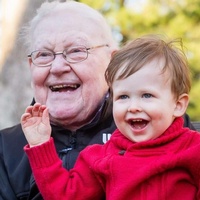 Richard James Galarneau, 93, of Vinton, and formerly of Radford, passed away peacefully at home September 12, 2018. He was preceded in death by his first wife, Edna Hall.

He served his country as an Army medical technician during the Korean Conflict, retired from the Radford Army Ammunition Plant after 20 years, and was a loving and devoted husband, father, grandfather and great-grandfather. Having never met a stranger, Richard leaves behind too many friends to count who, along with his family, will sorely miss him.

In lieu of flowers, the family asks that contributions be made to the OLN Renovation Fund or to Good Samaritan Hospice of Roanoke, Va.

The Galarneau family is in the care of Mullins Funeral Home & Crematory in Radford. www.mullinsfuneralhome.com