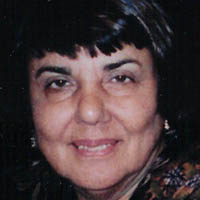 Patricia May Furey, nurturer of people, plants and animals, died peacefully on Thursday, September 10, 2015, at Carilion New River Valley Medical Center with her daughters by her side.

But Patricia wasn’t only devoted to her own education — she believed in its value, both inside and outside the classroom, for her children as well as their own. She taught one grandchild to knit and another to read; she passed down her sheer joy for making things, making music, and making gardens. Even animals and birds could count on a meal in Patricia’s beautiful backyard and her generosity extended to numerous animal and child welfare charities.

A volunteer organist for St. Mary’s, Patricia sang in the church choir and took up the saxophone in her fifties as a dedicated member of the Blacksburg Community Band. She loved to read, especially non-fiction, and cherished her book club of 45 years. A worthy adversary in her bridge group, she enjoyed all kinds of games, teaming up with her grandchildren for heated rounds of Pictionary and completing 2000-piece puzzles during family vacations to the shore. She dashed off the daily crossword puzzle (in pen) up to a week before her death.

Together with her husband of 62 years, Michael Furey, Patricia traveled the world — living abroad in England, sailing around the islands of Hawaii and Tahiti, and exploring Umbria. Michael passed away almost one year ago to the day.

Her wonderful spirit will be celebrated at the Hahn Garden Pavilion (located on Washington Street, Virginia Tech campus) on Monday, September 14 at 5pm. The family asks that, in lieu of flowers, donations be made to The Covenant House, Alley Cat Allies, and The Humane Society.