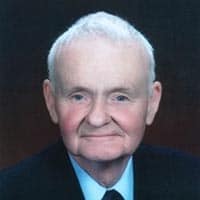 He was preceded in death by his wife, Irene Frost, his sister, Jacqueline Frost, and his parents, Mary Wheeling Frost and Harley Winton Frost. He is survived by his son and daughter-in-law, Alan and Vickie Frost, and granddaughters, Abbey and Lily Frost. He was special to so many people and was blessed with many lifelong friendships and a 67 year marriage to his “Sweet Irene” who preceded him in death last year.

He joined Aldersgate United Methodist Church at the age of 14 and was a Member for 79 years. He believed his purpose was to serve others and he did his best to live that out daily. He was especially proud of his work with the United Methodist Church Youth Ministry. He was a sub-district leader from the mid 1950s to the late 1980s. He also served on the board of Camp Dickenson, in Fries Virginia, for over 20 years.

He was a veteran of World War II and served in the Philippines during the war and was a member of the occupation force in Japan after the war. He was a pilot and loved to fly in his early years. He liked to roller skate and water ski. He always had a story to tell. He worked hard and he had fun.