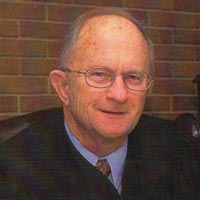 He graduated from Blacksburg High School in 1949, and attended VPI before entering the United States Army in September of 1952. He served in Korea, and upon completion of his service in August of 1954, returned to VPI where he received his B.S. in Business Administration in 1956. After receiving his law degree from Washington and Lee Law School in 1959, he returned to Blacksburg to open his own law practice, following in the footsteps of his grandfather W.O. Frith, who was the sole practicing attorney for many years in Blacksburg. Over the next 28 years he practiced law with several partners, including Jacque W. Pierce, Donald B. Irons, and David T. Mullins.

In 1987 he was appointed by the Virginia General Assembly as a District Judge for the 27th Judicial District, later serving as Chief District Court Judge. As Judge he greatly enjoyed the daily interactions with the wide segment of the public with business and other issues to be resolved in the General District Court. He championed efforts to increase funding for judicial education, and was instrumental in organizing periodic informal gatherings amongst the local judiciary. He was known for his sense of humor on the bench, and for running a fair, “no nonsense” courtroom.

He served as town attorney for Blacksburg; as a director of the National Bank of Blacksburg from 1966 through 1987; and as Chairman of the Democratic Party for Montgomery County. In his spare time, he enjoyed playing cards with family and friends throughout his life.

The family will receive visitors from 5pm to 7pm on Thursday, August 20, at the McCoy Funeral Home, 150 Country Club Dr. S.W., Blacksburg, VA. In lieu of flowers contributions may be made to the Blacksburg Volunteer Rescue Squad.