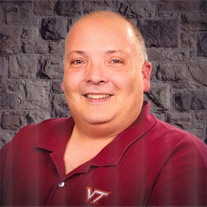 Robert Duane French, 46, of Christiansburg passed away Friday, March 11, 2016. Duane was a devoted father and husband to his family. He was employed by VA Tech Department of Athletics as a Financial Services Specialist.

Duane was an active member of Good Shepherd Baptist Church, serving in numerous roles. He was an integral part of Dayspring Christian Academy, where he served on the capital improvement committee, and was deeply involved with DCA athletics. Additionally, he was an active contributor to the Upward basketball program.

The family will receive friends on Monday, March 14 from 4 to 8 p.m. at Horne Funeral Home. Funeral services will be on Tuesday, March 15 at 2 p.m. at Good Shepherd Baptist Church with Pastor Matthew Kirkland officiating. Interment will follow in Sunset Cemetery.

In lieu of flowers memorials may be made to Good Shepherd Baptist Church or Dayspring Christian Academy.