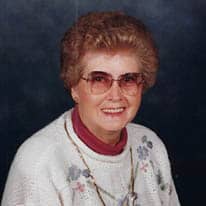 Hallie Mae Carlton French, age 91 of Pulaski, died Tuesday, March 1, 2022 at Pulaski Health and Rehabilitation Center. She was born in Pulaski on August 18, 1930, and was the daughter of the late Olive Maude Quesenberry Carlton and the late Beverly David Carlton, Sr.

Hallie worked for many years Jefferson Mills and later enjoyed the nursing profession, while working at the former Pulaski Retirement Center.

Funeral Services will be held Thursday, March 3, 2022 at Seagle Funeral home at 11:00 a.m. Interment will follow in Highland Memory Gardens. The family will receive friends on Thursday at the funeral home from 10:00 a.m. until 11:00 a.m.

Flowers are appreciated, but for those who wish, may make memorial contributions to the local charity of your choice or to the American Cancer Society.