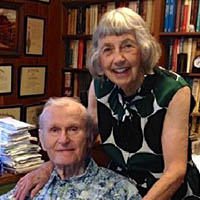 Daniel Frederick, 90, passed away on Sunday, September 20, 2015 at Montgomery Carilion Regional Hospital in Blacksburg, VA. He was born on April 29, 1925 to Eustace and Annie Frederick (deceased) in Switchback WV.

He was preceded in death by brothers Mishia and Eustace Frederick. He was a loving husband, father and grandfather. He will be sorely missed.

Upon graduating from Elkhorn High School in West Virginia in 1941 at the age of 16, He attended Bluefield Junior College before attending Virginia Tech. After earning a bachelor’s degree in civil engineering at the age of 19, followed by military service in World War II, he returned to Virginia Tech to earn a master’s degree in applied mechanics in 1948, all by the age of 22. He earned his Ph.D. from the University of Michigan.

When Dr. Frederick retired in 1992, he had established the exemplary record of having taught at least one course in every quarter or semester of his 45 years on the faculty at Virginia Tech. In addition, he was a visiting professor at the National Science Foundation (NSF) Advanced Mechanics Institute at the University of Colorado. He was an invited lecturer in the American Society for Engineering Education-NASA Summer Faculty Institute at the Langley Research Center. He served as director and lecturer in the NSF Conference on Continuum Mechanics. He also served as theoretical physicist in the Underwater Explosions Research Division of the Naval Shipyard in Portsmouth, Virginia, and a consultant at the Pacific Missile Range, Point Mugu, California. He supervised 44 Ph.D. students, co-authored two books and authored numerous other publications. Two of his students were responsible for the redesign of the Solid Rocket Boosters after the Challenger Disaster.

During his stewardship as the ESM Department Head, one of his significant achievements was the advancement of the sponsored research program into one of the top programs of its kind in the nation. Dr. Frederick’s own research career is notable for the successful management of a U.S. Department of Defense THEMIS Research Center, which provided the foundation for the large and successful research program in composite materials at Virginia Tech. As the ESM Head; Dr. Frederick placed major emphasis on excellence in teaching.

Funeral Services will be conducted McCoy Funeral Home at 150 Country Club Drive SW, Blacksburg, Virginia 24060 at 11 am on September 24th, 2015 in the McCoy Chapel with the Father Mark Tyson officiating. Interment will follow in the Westview Cemetery located at East Roanoke Street. The family will receive from 5 to 7 pm Wednesday September 23rd, 2015 at the McCoy Funeral Home.