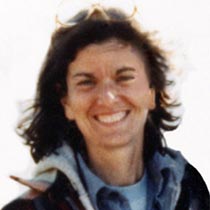 Nina Straker Fraser, 71, passed away peacefully on January 24, 2018, surrounded by her loving family, after a 40-year struggle with multiple sclerosis.

Nina held a number of positions in library/information science. She was a children’s librarian in the Yonkers Public Library System, assistant law librarian at the University of Idaho, an information specialist for the Chippewa National Forest, and a librarian for the U.S. Fish and Wildlife Service, Region 3, and for the Eastern Energy and Land Use Team. She conducted ecological research for the initial version of the Biota of Virginia database.

Nina enjoyed camping and wildlife watching throughout the United States and Canada. She continued to tent-camp even after the multiple sclerosis required her to walk with canes and eventually required her to ride an electric scooter, which gave her a sense of freedom. She commonly was seen in Blacksburg scooting to the grocery store or other places, protected only by the little red flag that flew above her, and often inciting concern from onlookers. She bore with grace the many insults multiple sclerosis threw at her. Her sunny disposition in spite of all adversity inspired many. She was the inspiration for Bike the US for MS, an organization that raises awareness of multiple sclerosis and supports MS patients and MS research.

Nina was preceded in death by her parents and her brother, Stephen Straker. She is survived by her husband, James Dempsey Fraser, and her son, Donald Robert Fraser, six nieces and nephews, and six great nieces and nephews.

Memorials may be made to Bike the US for MS at biketheusforms.org. The family plans to hold a private memorial service in the spring.