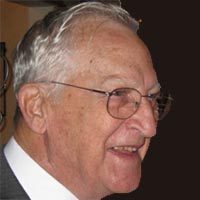 Dr. Chester Larrimore (Larry) Foy, 91, has left his life of service in this earthly home to continue his eternal life of joy with the Father. He died peacefully at home on Tuesday, November 12, 2019 in Roanoke, Virginia.

Larry was born on July 8, 1928 near Dukedom, Kentucky. He liked to say that he was born at an early age under very modest circumstances. He grew up living in a country store located on the Kentucky/Tennessee state line that was operated by his parents. Later his family moved to Martin, Tennessee, where he attended high school. Upon graduation, Larry entered the Army’s Specialized Training Reserve Program. As a commissioned officer, he led an Army Corps of Engineers platoon in the construction of runways during the Berlin Airlift following World War II.

Upon returning to the United States, Larry completed his Bachelor’s Degree in Agronomy in 1952 from the University of Tennessee. In Knoxville, he met his wife-to-be who was attending nursing school. After Larry completed a Master’s Degree in Field Crops from the University of Missouri, he and Betty married. From there, the couple moved to California where Larry completed a Ph.D. in Plant Physiology from the University of California – Davis in 1958. After completion of his doctorate, he was invited to remain at UC-Davis as a faculty member in the Botany Department. During this period, the family’s two children were born. In 1964, Larry took a one-year sabbatical leave in Frederick, MD to work on the development of chemical defoliants for the Army at Fort Detrick. After returning to California, Larry accepted a position in 1966 as a faculty member at Virginia Polytechnic Institute (Virginia Tech) in order to be closer to family who resided on the east coast.

Larry worked as a professor in the Plant Pathology and Physiology Department at Virginia Tech for 36 years, six of those years (1974-1980) as the department head. His primary responsibilities entailed research (basic and applied) and teaching in the areas of weed science and related subjects. As an internationally recognized expert on the physiology and biochemistry of herbicide mechanisms of action and adjuvants, he was widely published. He played leading roles in projects to eliminate crop devastation due to parasitic weeds. Among his numerous recognitions for his work were the Weed Scientist of the Year Award from the Southern Weed Science Society (SWSS), the Outstanding Researcher Award from the Weed Science Society of America (WSSA); the Outstanding Achievement Award from the International Weed Science Society (IWSS); and the Sigma Delta International Award for Distinguished Achievement in Agriculture. Larry served as president of the WSSA, and later as president of the IWSS, and was affiliated with a number of other professional organizations. In addition he served as editor for several professional journals. Larry and his wife were known for their hospitality to students, especially to students from abroad who were separated from their families while pursuing their education. Upon his retirement, Larry remained affiliated with Virginia Tech as a Professor Emeritus, mentoring students well into his later years.

Although he was very career oriented, Larry was a devoted spouse and father who enjoyed family time and activities such as Virginia Tech football and basketball games, hiking, camping, fishing, gardening, and crossword puzzles. He loved animals and was particularly fond of the family cat. Larry possessed a marvelous sense of humor, unknown to most of his professional colleagues, but greatly appreciated by his family.

As a Christian, he faithfully attended worship services at the Blacksburg Church of Christ, serving many years as an elder. His love of God was evident in the example he set for his family and others. He will be greatly missed.

“The master said, ‘Well done, my good and faithful servant.'”

Funeral services will be conducted Sunday, November 17, 2019 at 2:00 pm in the McCoy Funeral Home Chapel with Mr. Tom Gilliam officiating. Interment will follow in the Westview Cemetery, Blacksburg. The family will receive friends from 12-2:00 pm Sunday afternoon prior to the service at McCoy Funeral Home 150 Country Club Dr. SW, Blacksburg.